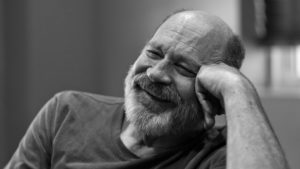 Bill Collings (1948 – 2017) moved from Ohio to Texas in the mid 1970’s. Spurred by a lack of interest in medical school, this move enabled him to combine lifelong interests in both guitars and tools into the challenge of stringed instrument building and repair. After a couple of years in Houston, several guitars and a few banjos later, he headed west to southern California. Making it only as far as Austin, he shared shops with fellow luthiers Tom Ellis and Mike Stevens.

From there, he set up his own small shop in a wooden “one car” garage. His reputation for outstanding quality and meticulous attention to detail quickly spread. In 1989, he rented a 1000 square foot space and hired two helpers. That same year, an order for 24 custom “Gruhn” guitars helped to establish Bill in the national market. In late 1991, a 3200 square foot “feed store” was purchased, on the outskirts of Austin, and was occupied in the spring of 1992. By 2005, the size of the shop had tripled with 50 full-time employees and ground was being broken for a new 22,000 square foot shop. The addition of CNC technology helped to add a level of consistency, accuracy and safety to parts production that was previously unavailable. As the business grew and processes were refined, there is one thing that did not change…Bill Collings’ commitment to building the finest acoustic steel string instruments possible.

In 2017 Bill died at the age of 68 years. His legacy is not just the guitar maker company, the guitars and his passion for quality. His legagy is the definately the Collings team of crafstman, the team that adapted Bill’s drive to do beter, and better and then some more. A team of quality driven craftsmen and support team that build guitar as only Collings can! With Bill watching over!